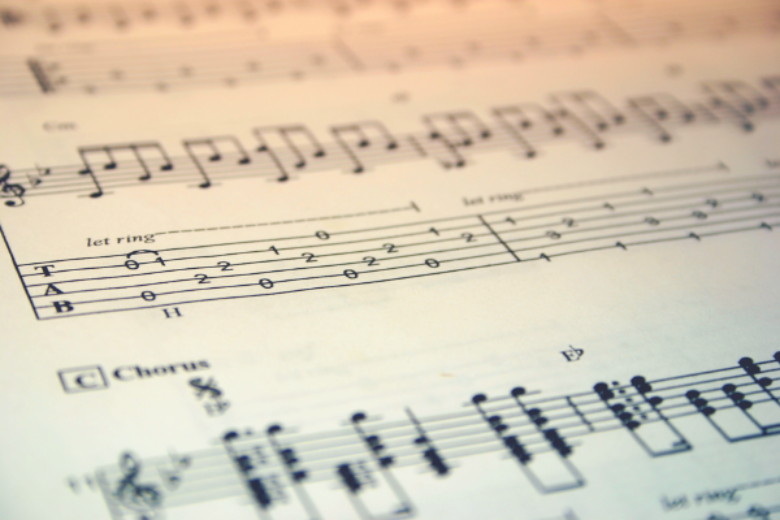 It’s super easy to learn how to read guitar tab. It’s essential wisdom for the budding guitarist. I can teach you How To Read Guitar Tabs In 15 minutes with my easy-to-read tabs and video examples.

Tablature is a special arrangement of numbers and symbols set out on a grid of six lines. Guitar tablature is far easier to learn than traditional musical notation.

Every guitarist should learn how to read tablature, as it’s a global language and is found to be extremely popular online.

Here are three images you’re likely to come across when searching for ‘guitar tab’.

Top left in Red is a guitar lick written in Standard Notation and Guitar Tablature.

The Lines are split into two ‘staffs’. The top staff shows the note symbols and values. The bottom 6 lines show numbers that translate to a guitar fretboard.
Both staff are playing the exact same melody.
The standard notation (top) is giving you a visual representation of ‘what’ the music sounds like. The symbols show you how to play the tune on any instrument, not just a guitar. A musical note can describe pitch and duration.

The bottom half is ‘guitar’ tablature. This is showing you what fret to play the notes on the guitar fingerboard. This type of tab doesn’t give you the duration or the name of that note.

The bottom left in Green is an online text-based tab. This is pretty much what you’ll find on big sites like Ultimate-Guitar.com.

This chart is again showing you where to play along the guitar fretboard. It also tells us the Am chord is involved in the melody.
In this example, the text is telling you that the notes are a part of the A minor chord.

On the right in Blue is a ‘Chord Box’, this is something you’ve probably already seen before. The black dots represent where you need to press in order to play the C chord correctly.

How To Read Guitar Tabs

Let’s start at the beginning with a simple diagram below.

When reading tablature you’ll be looking down at the guitar. The six strings on the guitar match the six on the tablature. Remember, the top staff is for all instruments so we won’t be needing that.

If you were to pluck the strings one by one, without pressing down on any of them, you would get the notes (from the thickest string) E-A-D-G-B-e. These strings are called ‘open strings’.

The tablature symbol for an ‘open’ string’ is O.

Here’s a ‘C’ chord. The box is giving you the six strings (vertical) and the frets (horizontal). The black dots are instructing you where to place your fingers. The ‘O’ symbol are open strings, that need to be played to create this ‘C’ chord.

Note the X outside the Chord Box. The X is used to inform you NOT to play that particular string when strumming this chord.

2- What Do The Numbers Mean?

I’m going to be using very simple tab boxes as you can see below. For the first few I’ve placed a real guitar neck next to the tab box so you can get a visual understanding of where the notes are.

In this example, you‘ve got 4 notes to play.

You always begin with the note that’s furthest to the left.

Play them one at a time remembering O is open. The number 2 refers to the note being played on the 2nd fret of the guitar. That’s it! You can now read guitar tablature.

Here is a video example:

Sometimes chord boxes also come with numbers. When this is present, it’s simply to show you which fingers you need to use to play the chord properly.

Note: a chord box is facing up, unlike the tab.

Below is a numbered finger picture, and to the right, you have the C chord.

The numbered chord box is telling you which fingers to use and where.

Sometimes you will need to use your (t) thumb over the top to bar the thickest E string. Pay attention to the O (open) notes which are plucked as a part of the chord.

Take a look at the video for instruction, note my finger positioning is the same as the diagram above.

4- Numbers Stacked On Top Of Each Other

Chords are also displayed in guitar tab, as well as chord boxes. When various numbers are stacked on top of each other, you’ll need to play those at the same time.

Once again, pay attention to the two open (O) notes.

Sometimes you’ll come across a chord with X‘s displayed on the strings:

Remember, as I’ve mentioned before, you do not play these notes with this chord

5- Numbers From Left To Right

When numbers are in a line, you always start with the number furthest to the left. You continue to play these, one at a time.

A Hammer-On is when you play a note once, then hammer your finger to a higher note. An h is placed between two notes to instruct you to ‘hammer-on’.

So in the example below: the furthest note to the left is an O, then h2.

So play the second string open, then hammer your finger down on the 2nd fret. There, that’s two notes. Now do the same on the string below. Finish with an open E (yellow).

Pull-offs can get pretty exciting whilst playing guitar.

In the tab diagram below your starting point is the 4th string down, on the 3rd fret. The letter p is placed between the notes, see (3p0).

This undoubtedly will take a bit of practice, but it’s worth it when you finally start mastering this technique. Check out the video to get a visual representation, as you’ll find that easier.

Look carefully to see if you have both hammer-ons and pulls-offs when reading tablature.

Now you’ll see the letters h and p between a group of numbers.

In the example below, you are firstly playing open G string (blue), then hammering on to fret 2 (0h2).

Finish this sequence by pulling off 2 into an open note (0h2h3p2p0). Then complete the lick with an open D (red) and fretting the low E at the 3rd Fret.

Don’t be put off by the amount of information there is in the diagram. Take one note at a time and understand what you need to do, before playing it on your guitar.

The video will help you understand it better

(b) Bending guitar strings is the most enjoyable part of playing. Once you start, you just can’t stop.

This is bending up a full step, so it sounds the same pitch as if you were to play the note on the 10th fret. Bending increases the pitch of the note.

Heres the video for that bend:

A Release Bend is exactly that. You need to release a bend to another a different pitch. You’ll find these thrown in with normal bends sometimes. The symbol for a release bend is (r).

You’ve already bent the string and now you need to release it to another note.

Look at the diagram closely and understand the procedure before playing anything.

‘Pb’ is also another notable bending technique. Pb stands for pre-bend. So you’re pre-bending a note before picking it. Basically, you’re bending it in silence before actually playing it. This is a nice skill to learn.

Sliding up and down the fretboard to notes is a great way to impress listeners whilst blasting out a solo. Its used by all the top guitarists. It’s a very satisfying sound.

As you can see we have 2 symbol diagrams. Slide up (/), and Slide down (\) the guitar fretboard.

Starting with the example below, we’re picking fret 2 then sliding up to 7 (2/7).

We then play an open D string (red), we then pluck fret 9-on the G string- play another open D and finish on the 11th fret G string.

To finish, pluck the G string at the 7th fret.

This may take a little practice, but it won’t take long to master.

Here’s the tutorial for both slides:

<> Is the symbol for harmonics. You will see a number in the middle of these two notes. In my example, you can clearly see a <12>.

You may see this now and again. It’s kinda used to sprinkle that little bit extra onto an intro or solo. It’s not as important as the rest of the symbols in this tutorial but you will come across them on your adventures.

To create a harmonic you lightly touch the string (or strings) without putting any pressure on it at all. You pick and untouch the string at the same time creating a very nice heavenly tone, swirling into the room.

For the example, you start from the left as always. Pluck the top e at the 12th fret- then b,g,d, let it ring out, and finish with a chord (as the numbers are stacked on top of each other).

‘The Kings Of The Blues’ BB King gave us some incredible shimmering vibrato.

In your quest for guitar greatness, you will come across the ~ symbol. The symbol can generally be found next to the note or above the staff. Older tablature also shows the vibrato as a ‘V’.

This will take a bit of practicing to master it at first, but vibrato has to be a part of your guitaring arsenal.

After you played the note with the 5~~~, shake the note only slightly, up and down to get vibrato. It’s a technique that is tricky at first. If you want a good teacher, youtube: BB King live! His style is so good.

Vibrato adds so much class to notes. Without it, the world of guitar music would be extremely dull.

When you see PM—- above the tab, it means the notes are played with ‘Palm Muting’.

This is a technique where you are scraping the strings fairly hard with your pick, but muting the sound of the strings with the outer edge of your strumming hand.

You’re only slightly dulling the sound as you need to hear the notes being played. If your notes are ringing out, you’re not muting enough with your strumming hand.

The good thing about this technique is that it’s easy to execute. Some Metal songs use palm muting throughout the whole song.

In my video clip, I’m muting then slightly releasing the palm pressure so my notes can be heard. Try it!

X– Can be used as a percussive way to play the guitar. X is the symbol for when you rake the strings with no notes being played or a percussive hit. Once again it’s used a lot in rock music and funk today.

Lightly place your finger on the strings, in essence dulling them right down. Strike up and down the strings, be aggressive! It sounds great.

The example below is a nice funky riff with lots of percussive muted strikes and throwing in notes to spice it up.

Note the tasty vibrato to spice it up.

Whilst reading tab, if you are able to listen to the song or the guitarist you’re learning from, this will give you an indication of what’s expected. Start off really slow, then play along with the song to get the speed and length of the notes.

This is also fantastic for training your ear.

If you want to learn how to ‘transcribe’ a piece of music from a recording, our friends over at Seventh String can help you with that. Click here to read more.

I hope you’ve gained some knowledge reading my article on ‘How To Read Guitar Tabs’. Go away and try to learn something with this know-how.

Once you understand the above instructions, you’ll never stop using them. In fact, you are well on your way to learning ANY song you like.