How To Record Acoustic Guitar. Mic Up or Record. Essential Tips You Need To Know 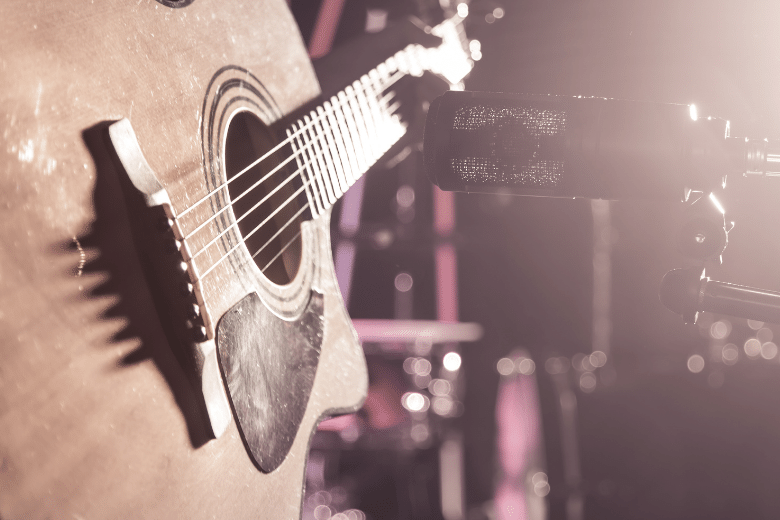 As the majority of us don’t own a state-of-the-art home studio or have a church to rehearse in. It’s a great idea to know how to record an acoustic guitar.

Learning a few tips and tricks to ensure you end up with a professional-sounding acoustic. Especially when thinking about recording an acoustic guitar or performing live.

Positioning microphones around your acoustic guitar, whether live or in the studio is no difficult task. But to get the best sound possible, it’s a good idea to know a few important factors.

My name is Lee from Authorityguitar.com and I’m a recording artist and performer of 25 years. I can share some valuable pointers I’ve learned to get you safely on your way to sounding fantastic.

‘You don’t require bank-busting recording equipment, all you need is the knowledge of your surroundings and a little patience

Let’s not get too drawn in by the best, most expensive microphones. And how the sound will bounce off certain surfaces better than others. Firstly, it’s essential to know, you need to get yourself a great sounding acoustic.

This, in essence, is going to be the main factor in your sound. If your acoustic guitar has poor intonation and old strings, it’s irrelevant what super expensive soundman you pay to record you. You’re going to sound awful either way.

Fit your acoustic model around the genre, or feel you’re trying to achieve. Many acoustic guitars are tailored for fingerpicking, strumming, or the player who’s all over the fretboard.

The most important thing to know before you start searching for microphones is to take the time to ensure your instrument is in top-notch order.

Warm-up a set of new strings, ensure your intonation is perfect. Decide on a sensible choice of pick, a suitable capo, and get perfectly in tune.

How Far Away Do I Place A Floor Mic?

12-16 inches is a great starting point. From there you can play around.

Let’s work on the concept of having one mic, and look at some basic positions. Right and Wrong!

At this point, it’s worth mentioning guitarists who like to move around and put on a show, may need to consider getting a clip-on mic. I’ve covered some useful techniques with the clip-on microphone later in this article.

Pointing the mic between the body and neck has a nice balanced flavor. This gives the player a buoyant light sound. It fits an acoustic tone that sits perfectly in the mix with other instruments.

The mic in the picture below is placed at the same height as the fretboard, and 14 inches away from the guitar for all pictures.

This seems to be a very popular position for a soundman, although it can be a little overwhelming as far as the ‘string sound’ is concerned. Especially if you have another guitar in the mix.

Pointing The Mic At The Soundhole

Now there’ll be some purists out there who believe the mic should go horizontal to the soundhole. This is how the guitar has been designed to project its sound.

The only danger with pointing the mic straight down the soundhole is the ‘boom’ factor. Without going into the science of frequencies. It’s far more sensible to start by pointing the mic at the join at the neck and the fret.

If you have too much of a weak strumming sound. My advice would be to point the mic back towards the body, and away from the neck. Small alterations can have big consequences. So make minor changes in tiny increments until you’re happy.

Adding bass to your overall sound is essential. Take into consideration the size of the room, experiment with pointing the mic towards your guitar’s body.

This will give you a much fuller deeper body sound. It’s also a great idea to point the mic up in the air slightly and move the mic backward.

Not too far though as you’ll have an abundance of air. Too much air for fingerpicking results in the audience missing the beauty and delicacy of the guitarist’s skill.

Sometimes logic isn’t always the best approach. If you’re too loud you don’t necessarily need to pull the mic away from the soundhole.

Try playing lighter and let the guitar’s natural resonance do the work. It’s your show, so trust your ears and go with your gut. The better you play, the mic will only make you sound even more special. Don’t rely on the mic to make you sound great.

If you have another guitarist handy, get them to strum your acoustic and slowly walk 180 degrees around the front of them. Figure out (by ear) where your ideal sound is resonating from. Start to position the mic around that area and go from there.

It’s also good practice to follow common sense. If you’re a wild fingerpicking player who likes to get around the fretboard. You may be creating fret buzz and unwanted scratchy high frequencies through the mic being too close.

Your audience may not appreciate that. My advice would be to position the mic away from the source of the issue. Not the distance!

As a guitarist, you may be playing some beautiful chord progressions and intricate melodies. But the mic may be picking up too much high frequency and highlighting it to your listeners. Ruining the experience.

In this case, there is an area around the bridge that is a goldmine of clarity for fingerpickers.

Make sure the sound isn’t being blocked by the picking hand. In this case, try positioning the mic above, and/or slightly below the guitar for superb results.

Note, I’ve lowered the mic pointing in an upward direction. This can also be executed from above.

If you’re a performing guitarist, you have no say in what size room you’re going to be performing in. You probably have no idea until you reach the venue anyhow.

Small rooms are not easy to get good mic’d sound from. This kinda cancels out a professional sound from home recording.

I’m not saying it is impossible to get a variety of decent tones from small rooms, it’s just not ideal.

The resonance of small rooms plays havoc with the lower frequencies of your guitar. The mic will unfortunately pick up on this, possibly giving you a muddy sound.

Let your guitar breathe, give it space to resonate where possible.

With that in mind, the flip side is the gigantic room. Although it might be an exciting prospect to play in a large room, you need to be aware of reflections.

Early reflections bounce the sound around the room before returning to the listener (or mic). This is the ideal scenario for acoustic performers.

Late reflections will ruin your performance. The reflections bounce around the large room and begin to decay. These reflections arrive back a lot later than the initial signal.  This causes the echo type sound which is unintelligible.

The human ear is remarkable, it will pick up the initial sound from your guitar, as well as the late reflections. This causes an awful confusing mess for our brains to deal with. So you can imagine what it would be like for your audience.

A clip-on mic is a very good option if you’re a guitarist who moves around and puts a show on. Or, you just want to be in control of your sound without having the sound man run around for you adjusting the mic angle.

The clip-on condenser mic is mounted to your guitar, rather than out front. It’s a great alternative if you play with other musicians.

Having a mic out front leaves the possibility of other instruments bleeding onto your track (especially bad if you have a hard hitting drummer).

Using the clip type of mic eliminates all of the bleeding, and concentrates fully on the sound you’re producing with your acoustic.

The clip-on feature comes with a gooseneck design, so you’re able to twist and replace the mic at different angles until you’ve found your ideal tone.

The great advantage to this is 1: you can move around and interact with your audience and 2: you can set up your desired sound at home before the show. Eliminating any accidents and giving you the confidence to perform.

They’re extremely lightweight but durable. Obviously, the mic needs to be clipped away from the pick or strumming hand.

Where Do I Clamp The Mic?

The ideal spot to clamp the mic would be either the top ot bottom shoulder of the guitar. You can start by pointing it directly at the guitar’s sweet spot. Which is where the neck meets the body.

This is where you receive a perfect blend of bass and highs. Again, as a solo player, this is a good place for you to be. This is also exactly where the vocal sits in the mix. Perfect accompaniment.

The beauty of the clip design is you can easily adjust the mic direction in tiny increments. The gooseneck and clamp are super easy to move. It holds in place without any issue. You can even move it mid-performance.

Unlike a microphone stand where you may need to get up on your feet and move it. Possibly kicking the foot on the stand giving your audience a shock.

If you’re a busy aggressive strummer. Or use your hand for percussive strikes on the acoustic body, you may want to consider the microphone on a stand option.

One strike of the clip-on mic with your hand may result in your audience receiving an almighty bang. Ten times louder than the actual strike. It can almost sound like a bomb dropping.

The major benefit to these types of clip-on mics is you have the option to plug the unit into a wireless system.

If you need to put on a show and get around the stage, this is definitely a good product for you. A lot of Country Artists use this approach.

Place the clip on the bottom shoulder and point towards the body to receive a distinct lower-end acoustic sound. Great for the solo player who uses a pick.

If you need to sit higher in the mix with your open chords. Face the mic between the 7th and 9th fret, and your thinner chord sounds will cut through the mix of other instruments. You can get a really nice glassy tone this way.

If you’re aiming for some natural room reflections, pull the mic away from the guitar’s body. This way you’ll pick up more of an airy sound. This is a go-to position for recording purposes.

There’s nothing quite like the natural acoustic sound bouncing around a room. My favorite!

Gentle fingerpickers. Pull the gooseneck close into the strings for a natural sound of your fingers moving around the fingerboard. I like to hear the fretting and buzzing of an acoustic. It makes it far more ‘real’ for me.

With a little bit of practice, you can achieve a professional-sounding acoustic when mic’d up. Follow the basic instructions and play around, it’s a trial and error approach that works.

If you are interested, the equipment I used in my article was kindly loaned to me by DPA Microphones. I’ve been lucky enough to play around with the Core 4099 (clip-on mic) and the 2011 twin diaphragm capsule microphone. Outstanding bits of kit for professional recording artists. They come with my full recommendation.

Lee has been playing guitar for over 25 years. In the 1990s he made a few TV appearances in London and supported and few big bands at festivals. He's recently sung on radio and worked as a full-time guitarist/singer on a holiday resort. Lee is the founder of Authority Guitar, a site where he wants readers to enjoy every aspect of learning the guitar.