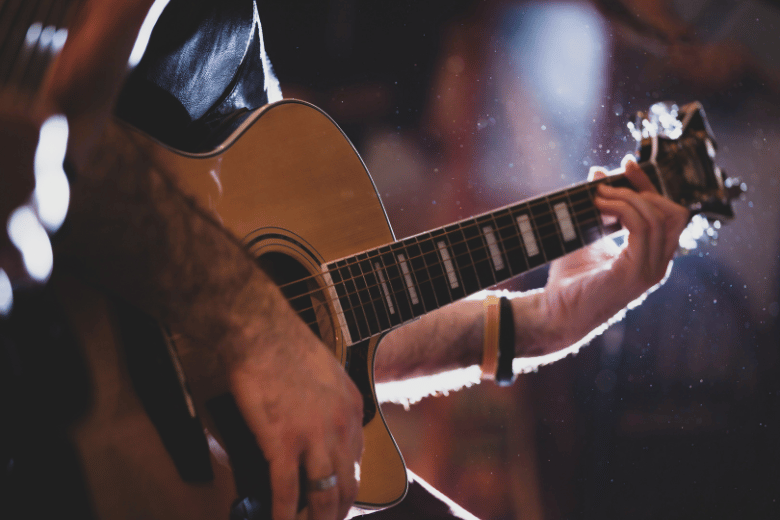 To become a better guitarist, you should focus on studying music theory. In music theory, the circle of fifths and fourths is one of the essential tools you will run into from the beginning.

One of those basic fundamentals will set the foundation of your understanding of music theory and lead the way in studying advanced music theory.

Circle of Fifths and Fourths: What is it?

The circle (or cycle) of fifths, often known as the cycle of fourths, is a graphic that clearly and quickly provides useful information on key signatures, chords, and scales.

In western music, twelve notes are called the chromatic scale. The Circle of Fifths, however, represents all diatonic major and minor keys in music, arranged according to the number of sharps and flats.

When it comes to the interval of fifths, it moves clockwise. A fifth of an interval is equivalent to seven semitones or seven guitar frets. For instance, the sequence C, G, D, A, E, and B comprises perfect fifth intervals and therefore belongs to the circle of fifths.

When it comes to the interval of fourths, it moves counterclockwise. A fourth of an interval is equivalent to five semitones or five guitar frets. For example, the sequence C, F, B flat, E flat, A flat, and G flat is made up of fourth intervals and therefore belongs to the circle of fourths.

Usually, the circle of fifths comes in handy in the study of classical music. In contrast, the circle of fourths is often used in jazz music. But both help in writing any shorts of music. Let’s learn some of their applications.

Finding the key of any song is one of the most popular uses of the cycle of fifths and fourths. At the top of the circle, you see that key C has no sharps. But every time you move one step forward to the circle, it sharpens the key.

That means the next key, G, has one sharp; after that, the key of D has two sharps. Similarly, A has three sharps, E has four sharps, and so on.

If you go anticlockwise, which will be the circle of fourths, it will add an extra flat to each move you take. That means the F key has one flat; the Bb has two flats; the Eb has three flats, and so on.

These sharp and flat counts can help you recognize the key of the song if you don’t know how to read sheet music. For example, if you see 2 sharps at the beginning of the score, you will know that it is in the key of D.

When it comes to songwriting circle of fifths and fourths is great to have around. Notice that the difference between the Key C and G (or any consecutive keys of the circle) is one sharp. As a result, these key sounds very close as there is only one note difference.

As a result, if you want to change the key, say from C to F#, which is just opposite in the circle, it will sound dissonant to the listeners as there are many different notes.

In that case, you can shift to the nearest key first and continue this all the way back to the opposite key. That way, the listener can keep track of what they are listening to. It will not sound dissonant, then.

Chords are usually constructed based on three notes called triads. They are the root, the 3rd note, and the fifth.

For example, if we want to play the A major chord, we must find the root note A. The third note C# will be two whole steps up. Now for the fifth note, you can follow the circle of fifths that shows after A; the fifth note is E.

Memorizing the circle of fifths will help you quickly figure out the notes. It gives confidence to the guitarists to learn and play more quickly than usual.

Reading scales of the diagram

You can read the notes of the scales from the diagram, which is the beauty of the circle of fifths. For example, let’s pick a scale, say D major Scale. To find out the notes of the D major scale, you must move five steps in a clockwise direction, counting each one. Also, add the previous note, which is G. You will have the root note D and  A, E, B, Gb, Db, and the previous note G…

1-4-5 is one of the most widely used beautiful chord progressions, especially in pop and blues music. You can develop this version from the circle of fifths and fourths. For example, play the chord profession C-F-G.

There are two chords that are known as the most important chords. They are the root chord and the dominant chord, which is the five chord. The five chord creates a bit of tension to the music that wants to resolve back to the root chord.

If you memorize the circle of fifths, you can find the five chord instantly. That is great, especially when you are jamming with friends other than writing music.

The entrance to knowing music theory is unlocked by the circle of fifths! Spend some time studying the relationships depicted in the circle every day, and you’ll be playing with the greats in no time.

Helpful Ways To Get You Started: Learn to play guitar